In summary If you love movies (who doesn't?) and you love Buffalo, NY (who's been there?), the Buffalo Film Festival was made for you.

Film festival promotion is a much sought-after gig in advertising. While we honestly love what we do (hey, we wouldn’t do it if we didn’t), it’s still safe to say that some projects have a bit more fun sprinkled in them than others. The recent posters, landing page, and YouTube channel update we did for the Buffalo International Film Festival qualified as exactly one of those projects. Not only was it a true group effort on the part of the SI design team, it was fantastic to work on a light-hearted campaign rife with geographic stereotypes. 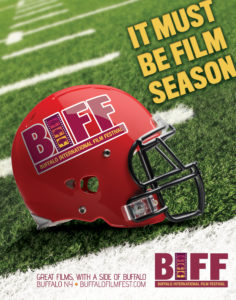 But it’s OK, one of our own is a Buffalo native.

Let us know what you think of the campaign in the comments: